On November 1, 1980, a truck driver driving by Sam Houston National Forest in Walker County, Texas discovered the unclothed body of a young girl along the shoulder of Interstate 45 North, two miles north of Huntsville and about a half-mile south of FM 1696.

An autopsy was conducted upon the body being brought in for examination, where it was learnt Jane Doe’s death had occurred approximately six hours prior to her body being discovered. She had been sexually assaulted with a blunt object, beaten and strangled to death. She had a bite mark on her left shoulder, and there was no semen found on her body.

One witness claimed to have seen Jane Doe at the South End Gulf station, around 6:30pm on October 31, asking for directions to the Ellis Prison Unit. She had been wearing blue jeans and a yellow pullover sweater with large pockets, and she was carrying a pair of high-heeled sandals. Her clothes looked dishevelled, as if she had been sleeping in them, and she was seen being let out of either a 1973 or 1974 blue Chevrolet with a lighter-coloured top, possibly a Caprice, that was driven by an older white male. Upon receiving directions to the prison, she left the station and walked north along Sam Houston Avenue.

Another witness who worked at the Hitchin’ Post truck stop on I-45 claimed Jane Doe had come into the restaurant the same night asking for directions to the prison, stating she had a friend who was locked up there. The waitress asked where she was from, to which she responded she was from the Aransas Pass and Rockport Area. When questioned about her age, she claimed to be 19 years old, and when asked if her parents knew of her location, she responded, “Who cares?” Upon having a map drawn for her, she left the restaurant.

Both sightings have not been verified.

To try and verify the witness accounts, Jane Doe’s image was shown to every inmate at the Ellis Prison Unit. However, no one was able to ID her. As well, schools and law enforcement agencies around the Rockport and Aransas Pass were asked about her name and address, but she couldn’t be identified.

There was speculation that Henry Lee Lucas was responsible for Jane Doe’s murder. However, investigators were unable to make a match between the bite mark on her left shoulder and his dental reconstruction.

On January 16, 1981, Jane Doe was buried in the Adickes Addition at Oakwood Cemetery. She was buried by the Huntsville Funeral Home and Morris Memorials provided the tombstone.

In 1999, Jane Doe’s body was exhumed by a forensic anthropologist in order to obtain information about her age and height, as well as grab a DNA sample, as there had been a similar unsolved murder in the Houston area.

In December 2015, a photo from the 1980s was shared by a family who believed they might have met Jane Doe while staying at a motel in Texas. The girl, who claimed to be 16 years old and from Corpus Christi, was a runaway who was planning on visiting an inmate in prison. Her name was either “Cathleen”, “Kathleen” or “Kati”, and she was staying with a couple who appeared to be in their mid-30s. The woman was very thin with long hair and the man had a beard, and the pair drove either a brown or maroon-coloured Dodge Diplomat.

It’s currently unknown if this photo has any relevance to Jane Doe’s case.

She had hazel eyes, with light brown hair that was approximately 10″ long. Her ears were pierced and she had a 1 1/2″ scar across the end of her right eyebrow. Her right nipple was possibly inverted. When her body was found, her toenails were painted pink. While her body was unclothed, it’s believed she was last seen wearing a pair of blue jeans, a dirty white-coloured shirt, a yellow sweater with large pockets and a pair of red leather high-heeled shoes.

Her body was found with a rectangular-shaped pendant with a smoky blue glass stone on a thin gold chain around the neck. Near the body was found some underwear, a pair of pantyhose and 3″ to 4″ platforms with light brown straps.

A look through her dental records show her teeth were well taken care of, and the condition of her body shows her to have been from a middle class family.

Police believe Jane Doe was killed elsewhere and her body dumped along I-45.

4) Maria Anjiras, who went missing from Norwalk, Connecticut on February 12, 1976.

Jane Doe’s dental records and fingerprints have been uploaded to national databases, and DNA samples have been processed.

Those with information regarding the identity of Jane Doe are being asked to call either the Walker County Sheriff’s Office at 936-435-2400, the Texas Department of Public Safety at 800-346-3243 or the Harris County Institute of Forensic Sciences at 713-796-6827.

The Murder of Leah Anderson 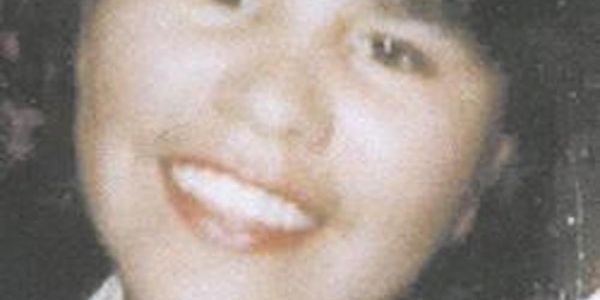 The Disappearance of Charlene Catholique

The Disappearance of Annie Yassie